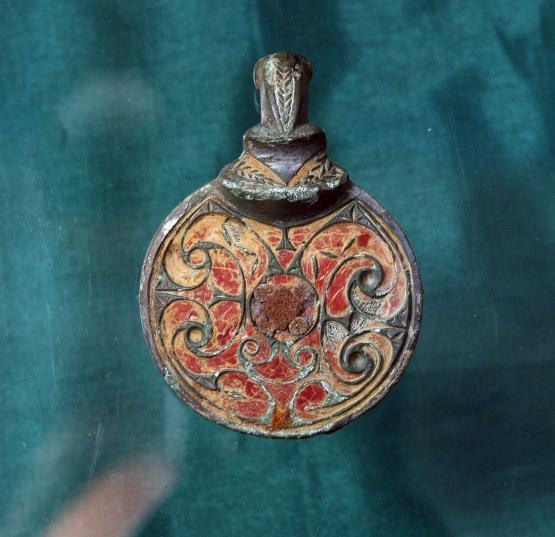 A copper-alloy Early Medieval hanging bowl mount or escutcheon of Anglo-Saxon attribution, dating to the c. 7th century AD. It is circular with an animal shaped hanger point on the top.

A copper-alloy Early Medieval hanging bowl mount or escutcheon of Anglo-Saxon attribution, dating to the c. 7th century AD. The mount consists of a discoidal mount body, with a zoomorphic hanging terminal. The zoomorphic terminal is comprised of a small curved and moulded head which faces the reverse of the mount, with raised traces of features such as snout, eyes and ears or brow. Following this, a sub-rectangular thick neck curves and connects to the decorated disc by means of a shallow semi-circular collar, followed by a cusped edge and a further, larger semi-circular cusped collar. The zoomorphic terminal connects to the disc at this point and the connecting point is located at the perfect top circumferential edge of the mount. The disc itself is very slightly convex, with an incised circumferential edge slightly inside of the outer edge of the object. Within the object, elaborate decoration emphasises detail and adds further design work to the object. The zoomorphic terminal is incised with a repeating decoration down the vertical centre of its curving neck, with a wedge-shaped double-line filled in with narrowing chevrons, which created a braided pattern. The cusped area between the smaller and larger collars is decorated with a large 'V', and the top of the larger semi-circular collar is decorated with further chevron or 'V' shapes, overlapping to create a braided or possibly tree-branch decoration. Traces of tinning or silvering are visible on the large V in the cusped area and on the lower braided or tree-branch decoration, highlighting the detail. Following this, the entirety of the mount body is filled with recessed cells, consisting of a swirling motif similar in style to that of the Battersea Shield or similar mounts from this period. Within the recessed areas, a large degree of red enamel is still intact. Within the very centre of the mount, a recessed circle has been inlaid with red enamel alternating with millefiori glass circles and a central extremely elaborate quatrefoil decoration which has been outlined with small red dots. Areas of raised copper alloy creating the recessed decoration have been further incised, particuarly in areas where the metal is thicker for design effect. The outer circumference of the mount disc itself has also been tinned or silvered.

The reverse surface of the object is slightly recessed and there is a buff-coloured substance around its edges, suggesting perhaps that this object was soldered or otherwise fixed into place.

Helen Geake adds: This design is far more complex than that found on most hanging-bowl mounts. It has a central square, possibly of millefiori, surrounded by four millefiori circles all within a circular cell. Surrounding this are two large peltae, one to left and one to right, with their curving backs inmost. These are both subdivided horizontally by a strip of reserved metal with a groove in the centre, which runs in from the centre of each pelta's back and flares before a straight end. The right-hand pelta has some missing enamel, showing keying grooves in the metal beneath. Between these large peltae, below the centre, is a smaller pelta, set with its curving back to the outside. The ends of the arms of the larger peltae have deeply recessed circles, one with red enamel evident within. From the upper circle of each pelta spring two more curving ridges of metal; at the junctions of these cells are three tiny pointed-oval grooves. These ridges form two upward- and inward-spiralling cells; the larger upper cell on either side has three long oval motifs in reserved metal, rather like those set chevron-wise on the neck of the hook. They are larger, and form a zig-zag. The ridges flare like trumpets to their ends, where they are decorated with further groups of three long pointed-ovals. A triangular space immediately below the hook is filled with a reserved triangle of metal with red enamel around.

Moving down to the lower sunken circles at the edge of the large peltae, again a further two ridges of metal spring from here. The upper one forms the 'stalk' of the pelta's mushroom, and where it turns a corner at the base of the stalk has a set of three tiny pointed-oval grooves.They spiral out and round the base of the disc to meet in an expanded spiral cell. These two cells have a gap between, as usual filled with red enamel.

Peltae are common motifs on hanging-bowl mounts, normally in sets of four (for enamelled mounts) or two (for openwork mounts). Examples of four peltae on enamelled mounts include Castor, Cambs; Morden; Sutton Hoo bowl 3; Lighthorne, Warwicks (Bruce-Mitford 2005, nos. 12, 20, 90, 94); the last of these also has millefiori decoration. Openwork mounts with two peltae also often have the large moulding or collar at the base of the hook (compare, for example, West Wickham, Bruce-Mitford 2005, no. 21). Three peltae are an obvious combination of a four-pelta arrangement with a large collar occupying the space where the upper pelta should be, but no good parallel seems yet to be known.

Millefiori is very unusual on hanging-bowl mounts; Bruce-Mitford lists 11 examples of hanging-bowls with millefiori (2005, 67). There are similar star-in-circle designs from several, such as the St Paul in the Bail bowl, the exterior base escutcheon on the Manton Warren bowl, and on the Sutton Hoo bowl 1 (Bruce-Mitford 2005, col pl. 4); the same design can also be found in an enamelled version on the Baginton bowl (Bruce-Mitford 2005, no. 93).

This item has been preliminarily assessed with the assistance of multiple specialists at the British Museum.