Our collections can still be accessed and enjoyed away from the Museum and more fantastic content is being added all the time. See below to explore our videos, oral histories and activities.

Did you know that Littlehampton Museum has a collection of over 30,000 items?

Litltehampton Museum Presents a virtual talk by seaside historian Kathryn Ferry. Kathryn explores the changing fashions of seaside architecture across the country comparing and contrasting Littlehampton's architecture with historic examples from all over the nation. Her new book book Seaside 100: The History of the British Seaside in 100 Objects comes highly recommended by the Museum Team. For more information about Kathryn and her publications please visit: https://www.kathrynferry.co.uk/

Victory in Littlehampton. On the 8th May 1945 the long awaited announcement came. The war was over in Europe. After almost 6 years, the fighting was done and the enemy had been defeated, Littlehampton was ready to celebrate.

The Town was decked out with bunting and flags and streets across Littlehampton came together to create street parties full of colour and joy. All the pubs across the town were given permission to stay open late, the cinemas were full of people and some parties lasted for days

The Two videos featured hear include a photograph slide show and a 30 minute public talk. The photograph slideshow was created to mark the 75th anniversary of the end of the war in Europe. It shows the people of Littlehampton celebrating with street parties throughout the town.

Photographs are taken from the Museum Archive, The Littlehampton Gazette and some are used with permission of members of the Facebook group Bygone Littlehampton.

The Virtual talk covers Littlehampton at war from 1939-1945, a fascinating look at the Museum's collections relating to this time.

Oral History involves the collection of people's memories of their life, of big events or places, usually through either audio or video recording. For the Museum this has been used to capture people's memories of living in the Town and gives us a unique time capsule of information. Below you can explore some of our wonderful archive of audio recordings.

Please note that these are unedited full interviews, as the content covered includes the Second World War, there may be content that some listeners  find distressing.

The Museum holds a large collection of Littlehampton Postcards dating from the 1900s to the late 1990s. In this slideshow you can explore just some of the thousands that we have in our archive.

Why not then have a go at deigning your own postcard using our activity template. 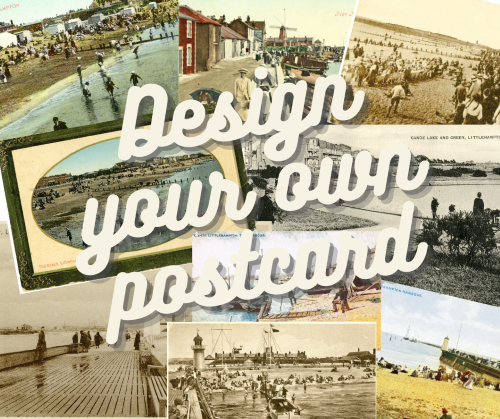 Have a go at designing your own postcard by downloading the guide and template below.

Design Your Own Postcard - Guide

Enjoy our selection of online exhibitions on a wide range of topics from all over our archives.  More coming soon!

Typography: An exhibition of weird, wonderful and quirky design. Using items from the History of Littlehampton.

Littlehampton's War 1939-1945 - as told by the people that lived through it: Using the Museum's Oral History archives and the collection to explore Littlehampton at War.

Littlehampton Museum OPEN during COVID-19: In June 2020 we launched the theme for our OPEN exhibition and invited people to submit work created during lockdown for an extra special exhibition reflecting on the effects this pandemic has had on us all.

We were hopeful for a return to normality by winter, however when it became clear that this would not be the case, we decided to create our very first online OPEN exhibition featuring all work submitted, providing a safe way for everybody to experience all the wonderful pieces of artwork created during this time.

2018 marked 100 years since Women were first entitled to Vote. During 2018 Littlehampton Museum held a small exhibition to tell the story of Littlehampton's Suffragettes. Their story is little known and and important pat of the history of the Town. Click the link below to read all the information which was included in the exhibition.

Download some fun crafts and activities inspired by our collection or download some learning resources. From crafts to colouring you can find a wealth of resources here to download and use at at home. Don't forget to share your creations with us on Facebook!