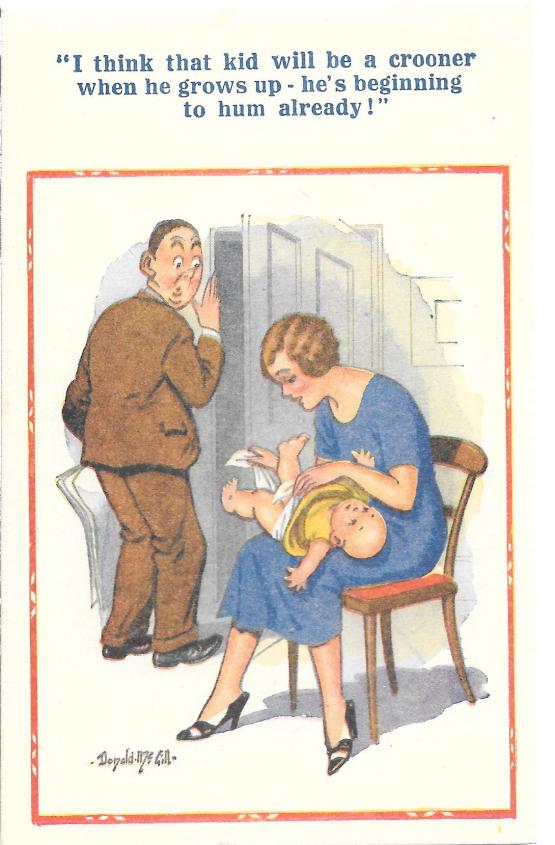 Donald Fraser Gould McGill was to become a name synonymous with the comic postcard. He was a traditional Victorian gentleman with a fine upbringing, yet he was also called the ‘King of the Saucy Postcards’ and ‘The Ace of Cards’. His artistic talents were discovered at school, and he later studied for an Arts and Crafts teacher’s certificate but left after a year as he did not enjoy the syllabus. McGill began with a humorous sketch he made on the back of a postcard for his brother. With his brother’s encouragement Donald began to draw postcards in his spare time for Max Honnest-Reddlich, the founder of the Pictorial Postcard Company. The subjects of the earlier postcards were a long way from the saucy seaside characters that were so popular in the 1960s.

Football caricatures and political jokes were common designs, as well as social observations such as that of the policeman pictured on the right.  Although it took some time for McGill’s signature style of using bold primary colours to appear, it was always the joke that came first. Donald would listen closely to conversations in the pub for inspiration, and read the papers and listened to the radio for ideas. It was McGill’s skill at revealing hidden meanings in the joke that is at the heart of his appeal.

He would always start with the joke and write out the caption, and then turn to his drawing board to sketch out the design on pieces of roughly cut board. He made a line drawing first, and then he used watercolours from an ordinary child’s paint box to paint the postcard. His family would keep him company whilst he worked and his work room was always full of laughter. McGill’s early postcards were sold for six shillings each, and during his early years he drew about six a week, working freelance as well as for the Pictorial Postcard Company.

At the beginning of Donald’s career there were not many seaside postcards being produced, but there was a steady market for Christmas, Birthdays and Valentine cards. McGill’s cards were also printed abroad, often with no border and the background completely coloured in, with place names often being written in to increase local sales. Despite the success of McGill’s comic and novelty cards, the Pictorial Postcard Company ran into problems in 1908 and was soon taken over by Mr Percy Hudson, whom Donald continued to work for until 1910. McGill struggled to find his signature style, though his stock characters that we all recognise today of his spinsters, hen-pecked husbands, flirts, Scotsmen and drunks were beginning to appear. Although a proud Scot himself, McGill was always ready to laugh with his Countrymen, and he soon became well known for his jokes surrounding what was under a Scotsman’s kilt.

McGill’s early jokes ranged from the harmless to the genuinely funny, with adult humour often being used by children, making their remarks seemingly more innocent and supposedly more acceptable. Having had one foot amputated McGill was unable to take part in the First World War, and he stepped up his work to produce nine new postcards every week. The Admiralty realised the morale boosting effects McGill’s designs had on the troops and slogans such as ‘British Made’ and ‘British Manufacture throughout’ appear on the backs of his postcards from then onwards. As a comic card artist Donald saw his role as an entertainer, to lighten the burden of war with a laugh. Donald McGill never claimed to be a social historian but as his postcards spanned nearly six decades he provides us with a fantastic insight into the times, however unconsciously displayed. As we reach the 1930s, Donald was well settled into his signature style, examples of which you can explore today.