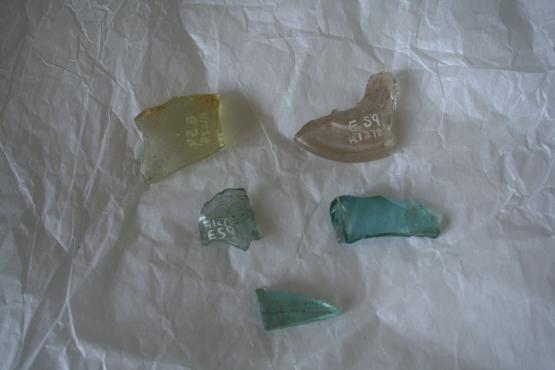 Another key archaeological feature in the local area is the Angmering Roman Villa, which is now a scheduled monument. Excavations were carried out on the villa site in the 1930s and 1940s, and concentrated principally on the large bath house complex adjacent to the villa itself, which largely remains unexcavated. This glass spindle whorl was one of a series of small finds donated to the museum following the investigation. The museum's curator, E.J.F. Hearne was on the fundraising committee to assist the investigations prior to the outbreak of the second world war.

This whorl would have been doughnut shaped, and would have slotted onto a wooden stick to allow a counterweight to help the spindle to spin for a long time. It was quite common for households to produce their own fibre and cloth, a skill that most girls would be taught from a young age, before moving on to weaving the cloth for the household.