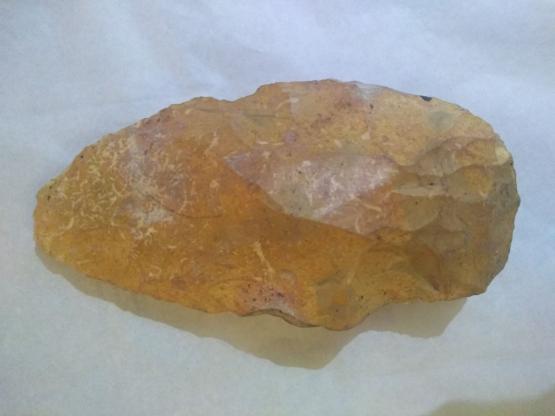 Here we have a brilliant example of a paleolithic hand axe, its distinctive oval shape is referred to as "achulean", and can be dated to 1.5million years ago, before modern homo sapiens had appeared. These tools were most definitely not used by modern humans, but more likely early neanderthals and early homo erectus type beings.

This hand-axe is termed as 'biface' because it was at this time that tools began to be worked identically on each side. The area where this tool was found is only a few miles away from the internationally important lower-paleolithic site of Eartham Pit near Boxgrove, and is one of the oldest sites with direct evidence of hunting / butchering by humans, so it is little wonder an axe like this would be found close by!

An axe like this would have been used to hunt and prepare animals such as lions, bears, rhinos and giant deer, which were native to Britain during this time.

Prehistoric archaeologists Mike Pitts and Mark Roberts also wrote a book about the investigations at Boxgrove, titled "Fairweather Eden: Life Half a Million Years Ago As Revealed By the Excavations At Boxgrove" which is available from various retailers.