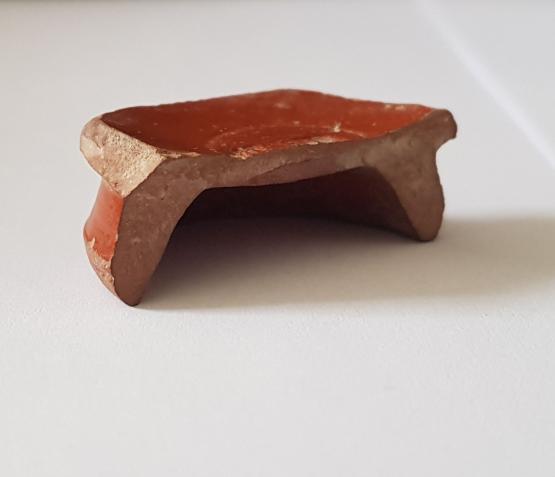 One of the Natural Science and Archaeological Society's first publicised excavation sites in the early 20th century, the Museum holds many objects found at Shepherds Garden in Arundel Park. There is evidence in our collection of settlements in this area dating from prehistory to the early modern period.

We are able to classify this piece of pottery as a very common Roman type of ware called "Samianware" or "Terra Sigillata".  There are a number of known factories producing a finite number of forms during the 1st century ACE in Europe, mostly in France. Because of this we can identify this sherd simply by its profile, and know that it is a cup base. Even more interestingly, this sherd has a stamp on it which reads "OF SEV" - a stamp used by Severus of La Graufesenque, in southern Gaul.

La Graufesenque is an archaeological site, and in the gallo-Roman period it was known as "Condatomagus" and was famous for its production of high-quality terra sigillata which was exported all over the western Roman empire. Because of this connection, we know who made the cup, and where it originally came from - a true example of globalisation in its infancy! The kilns used to fire this pottery are still visible today, if you ever choose to go and visit the listed historic monument in the south of France.