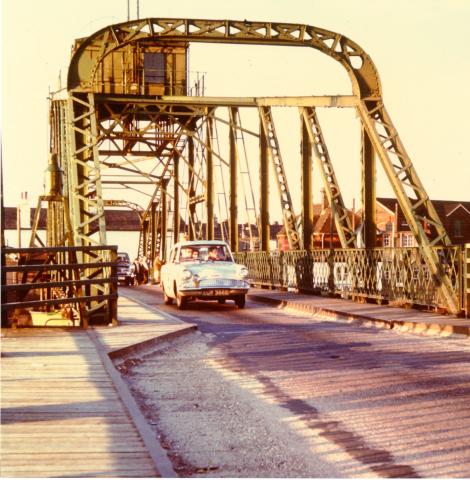 Jill Belchamber, from the Friends of Littlehampton Museum has been researching the history of the Old Swing Bridge in Littlehampton.

The River Arun has always played an important part in the development of the town and it is hard to believe that many many years ago Littlehampton was considered to be a locked in town.  Roads were almost non existent and the river formed a natural barrier to the west which meant that the residents of Clymping, Yapton and Littlehampton probably never met unless they travelled via Arundel

As far back as the reign of Henry VI the Dudley family made provision for a small oared passenger ferry boat, probably for a modest fee.  Should a mounted traveller wish to cross the poor horse would have been tied to the stern and would have to swim.  In 1633 this ferry was still in existence being run by a Richard Morgan and is probably the same ferry service manned by Mrs Piper wife of a harbour pilot and Parish Clerk, just prior to the chain ferry being installed.

By about the 18th/19th centuries the harbour began to flourish most notably because of Stephen Olliver who built a shipyard and rope works in 1837 on the west bank of the river.  In view of the increase in trade several notable businessmen considered it was time they had a more efficient means of access across the river.  So a proposal was put forward and plans drawn up to build a bridge.  However this proposal was strongly opposed by dignitaries, shipping merchants and traders from Arundel.  They put forward many objections such as a bridge would be a navigational hazard, impede the flow of water to Arundel and affect their trade.  So no bridge.

However the promoters did not let it rest and came up with a plan for a ferry barge in place of Mrs Piper’s rowing boat.

As a barge would not cause any hazards there were no objections and an Act of 1824 was obtained.  The barge was built in the boatyard of Thomas Tupper Isemonger with wood provided by Butts.  The winding gear by Bramahs of London and the overall design planned by John Skirrow civil engineer also from London.   The finished barge which was capable of carrying a coach and four with space to spare was fully operational and put into service in June 1824.  A red flag was hoisted when in use to warn river traffic of the taut iron chain. The approaches and surrounding roads to the barge needed to be upgraded so a Ferry Trust was set up to deal with this.

By the middle of the 1860’s the wooden barge, then being managed by Alfred Scarpe and his son William, was becoming waterlogged and giving trouble despite several repairs having been carried out to no avail, so in 1873 it was agreed a steel pontoon would replace the wooden one.

By the latter part of the 19th century it became more obvious that a bridge was badly needed so in 1902 Neville Edwards Chairman of the UDC, a driving force for a bridge along with Rev Green Vicar of Clymping, had already put together ideas and costings for the type of bridge they thought would be needed.    These were presented to the Council and in 1903 a special Bridge Committee was formed with Neville Edwards as chairman. The Council then decided they were ready to present them to the townspeople so accordingly, a prescribed “Grand Public Meeting” took place on Friday 13th January 1903.  It was a lively debate with speakers for and against the scheme.  Following that meeting a referendum was arranged for the 31st January. Voting at the poll was not high but came out as following - For the bridge 675 – Against 213.

Plans were taken to the Select Committee when a petition was put forward about the burden of cost which would be put on the ADC.  However the Bill was passed mainly on the grounds that the barge was no longer safe to use.  Royal Assent was granted on the 4th August 1905 which cleared the way for work on the new swing bridge to begin.

Tenders for the work were to be submitted to the Town Clerk, in the meantime in April engineers from Dandos made test borings of the river bed.   It was decided because of soft ground on the west bank the opening section of the bridge should be on the east side of the river.  The firm of Alfred Thorne & Sons of Westminster were given the contract. By May 1907 work was sufficiently ahead for the laying of the foundation stone which was performed by Henry 15th Duke of Norfolk.

Work carried on at a pace and soon the bridge was ready for use.  So, after nearly 100 years of planning and frustration, the grand Official Opening was performed on the 27th May 1908 by the Duke of Norfolk. The day was declared a public holiday. A grand procession with school children, members of the public and armed forces lining the streets took place to celebrate this very festive occasion. It is estimated about 2000 children were given a ticket for a free tea party following the celebrations.