Lest We Forget: War Stories from the Archive. 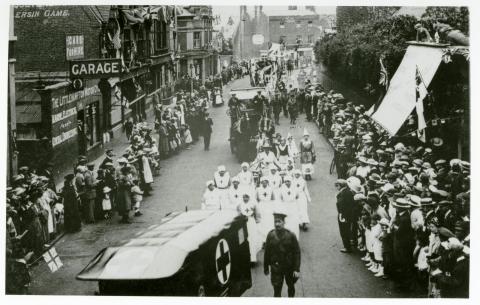 Every year we mark Remembrance Day on the 11th November and on Remembrance Sunday. Remembrance Day is a time to remember members of the Armed Forces who have lost their lives in the line of duty. The Museum Archive holds many stories of those who lost their lives whilst in active service. And this is the story of one Littlehampton resident during WWI. This Blog Post has been written by Charlotte Burford, the Museum Curator and by Ann Brown, Volunteer Researcher. All historical research has been completed by Ann Brown.

A few weeks ago Charlotte selected another box from our Document archive to catalogue and digitise. The box was labelled the Edgell Family Archive. “Inside I discovered piles of Documents, letters and books from the early 1900s through to the 1930’s.  Many were handwritten letters and seemed to be heart-warming family correspondence.” All the letters and documents related to the Edgell Family who lived and worked in Littlehampton as Mechanical Engineers.

With the help of our Volunteer researcher, Ann, we have pieced together the story of this Family and their sad loss during World War One.

One of the first letters we picked out of the box was a telegram, one of the cold realities of war that every family dreaded receiving. Today the world is so connected that news travels at the press of a button but in 1918 the fastest way to convey bad news was via telegram.

As you can see the telegram was to inform the Edgell family that their son, Eddie, who was serving with the newly created Royal Air Force, was missing. The telegram was received on the15th August 1918.

But who was Eddie Edgell?

Edward Edgell was born on the 1st July 1899 to parents Albert Edward Edgell and Esther Edgell. Eddie was one of 6 Children, his father also had children from a previous marriage.

His family has moved from London to Littlehampton sometime between 1904 and 1911. The Census shows them living at 26 Norfolk Road, Littlehampton. Both Eddie and his Father are described as Scientific instrument makers.

Eddie was called up for Service on 3rd October 1917 and was enlisted into the Royal Flying Corps. Eddie was barely 18 Years old at the time he enlisted. In the later part of 1917 and the early part of 1918 Eddie was a Flight Cadet and spent his time training, learning Morse Code and Topography. In April 1918 he was transferred to the newly formed Royal Air Force (R.A.F) where he trained as an officer cadet. By July 1918 he had been granted a temporary promotion to 2nd Lieutenant and was posted to France.

On August 11th 1918 Eddie was out on a mission as a Gunner alongside Pilot 2nd Lieutenant Geary. It is thought that during this mission the pair were gunned down and were consequently reported missing. Both men were only 19 years old.

Albert had rather touchingly written to his son on July 25th 1918 words of fatherly advice ‘keep yourself cool as possible when you are at work, you will be more sure of your aim when shooting’

His father wrote to his Squadron soon after he was reported missing to try to ascertain what had happened. The reply written on 1st September records that  Eddie was sent on a bombing raid and the plane was seen going down in flames after heavy enemy action and there was little hope he had survived, it also records that his effects were being sent on from Boulogne. Mungo Park writes that Eddie was a gallant and popular officer. 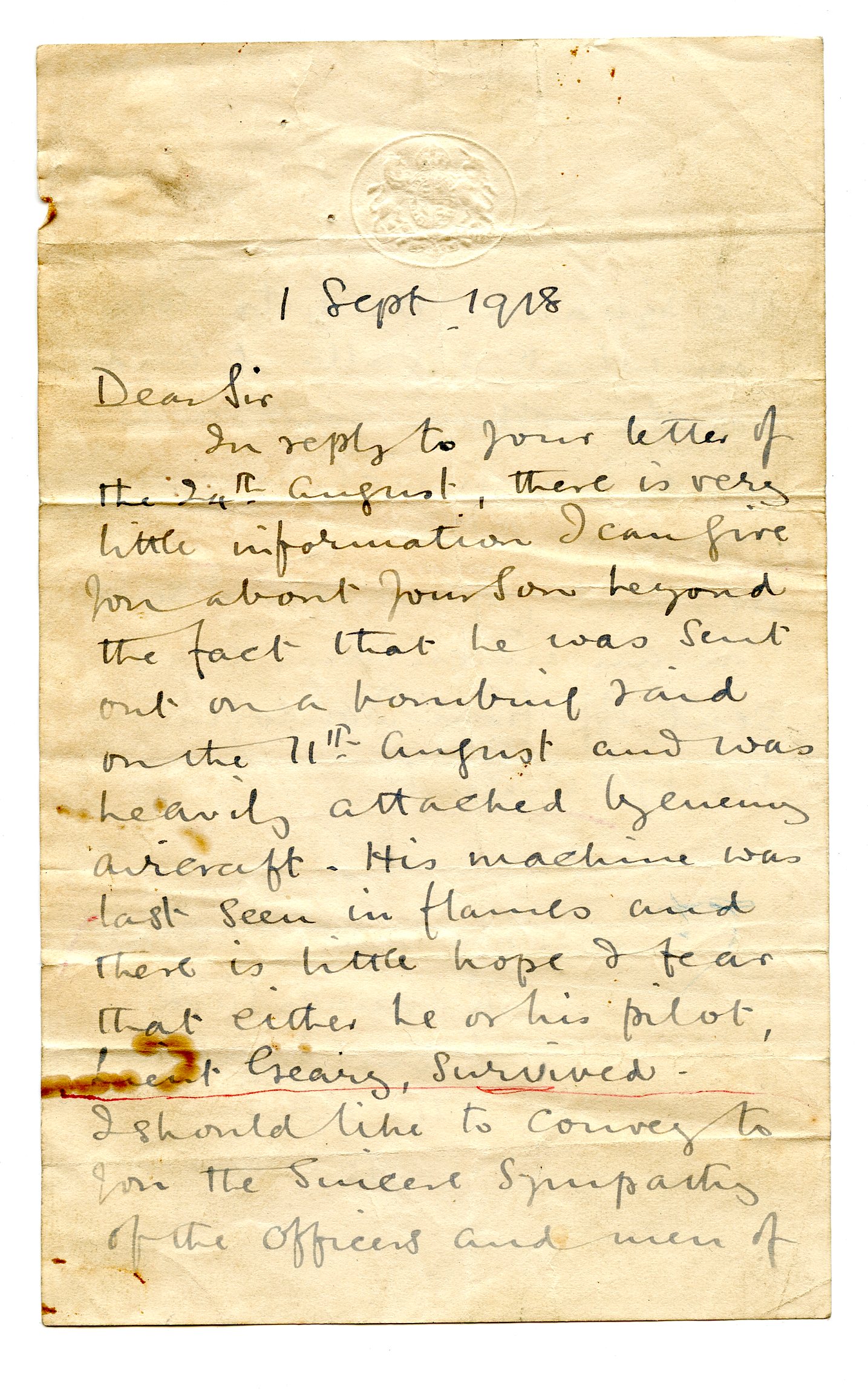 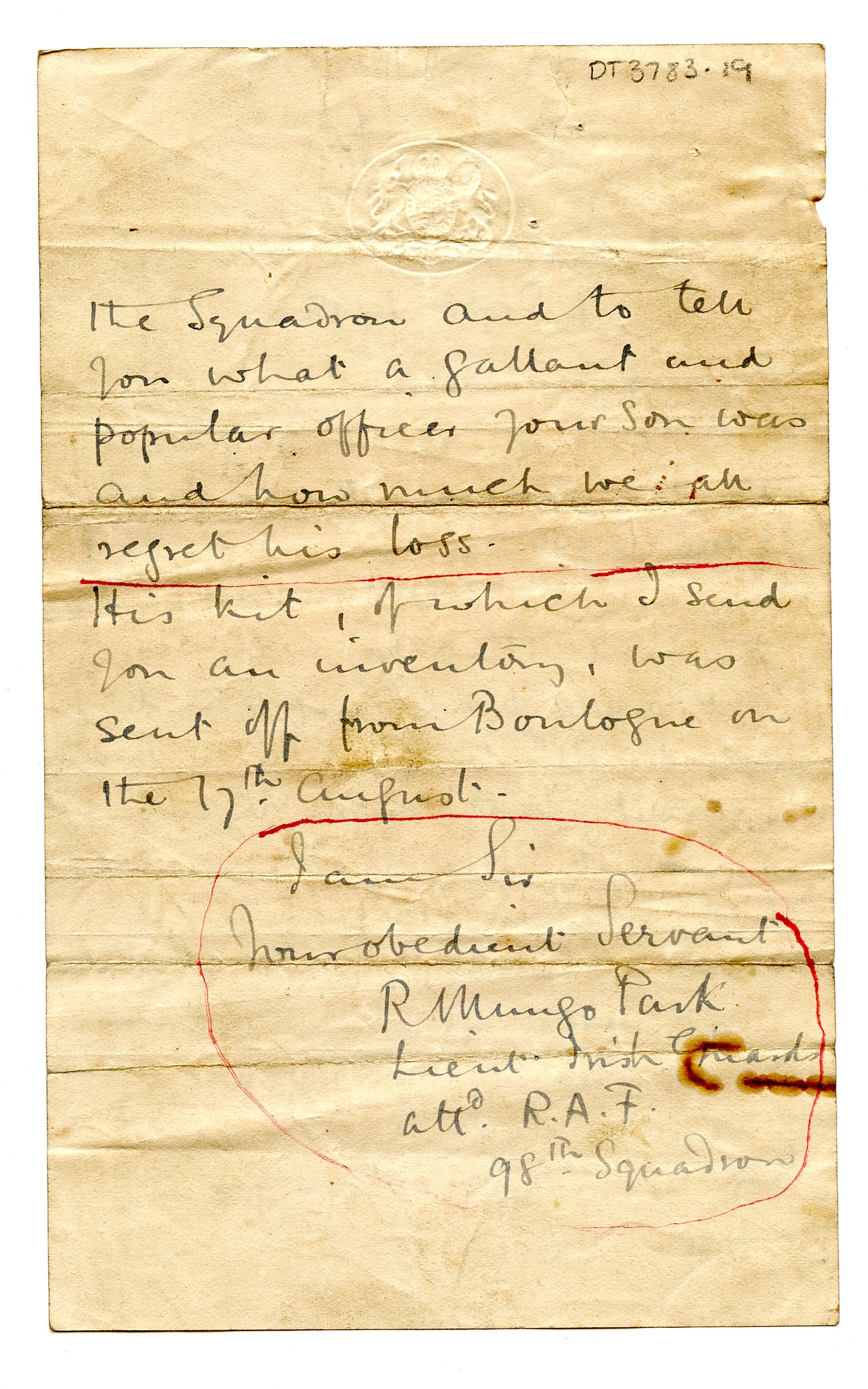 More official letters from the Air Ministry record they wrote to his father on 15th August 1915 to record he was missing and then on 16th October 1918 that he had now been reported killed although this could not be accepted for official purposes until a further length of time had passed.

Albert appears to have written several letters to the Air Ministry to find out what had happened to his son. It must have been a very worrying time for both his parents and family not knowing if he had died or was just missing.  A letter from the Air Ministry dated 28th April 1919 stated that no news had been received that Eddie was alive or taken prisoner so the conclusion had to be that he had died on the day he went missing. It further states that his name would be removed from the official casualty list and reinstated if it was later heard that he was alive in enemy hands. The final letter from them in June 1919 confirmed Eddie’s pension gratuity.

The document archive box also contained Eddie’s notebook used earlier in the year during training as well as postcards and letters sent home to his family. Like many families the Edgell Family had lost their son, too young and too soon.

Eddie has no known grave. His life and sacrifice are commemorated on both the War Memorial in Littlehampton and at the Arras Flying Service Memorial. 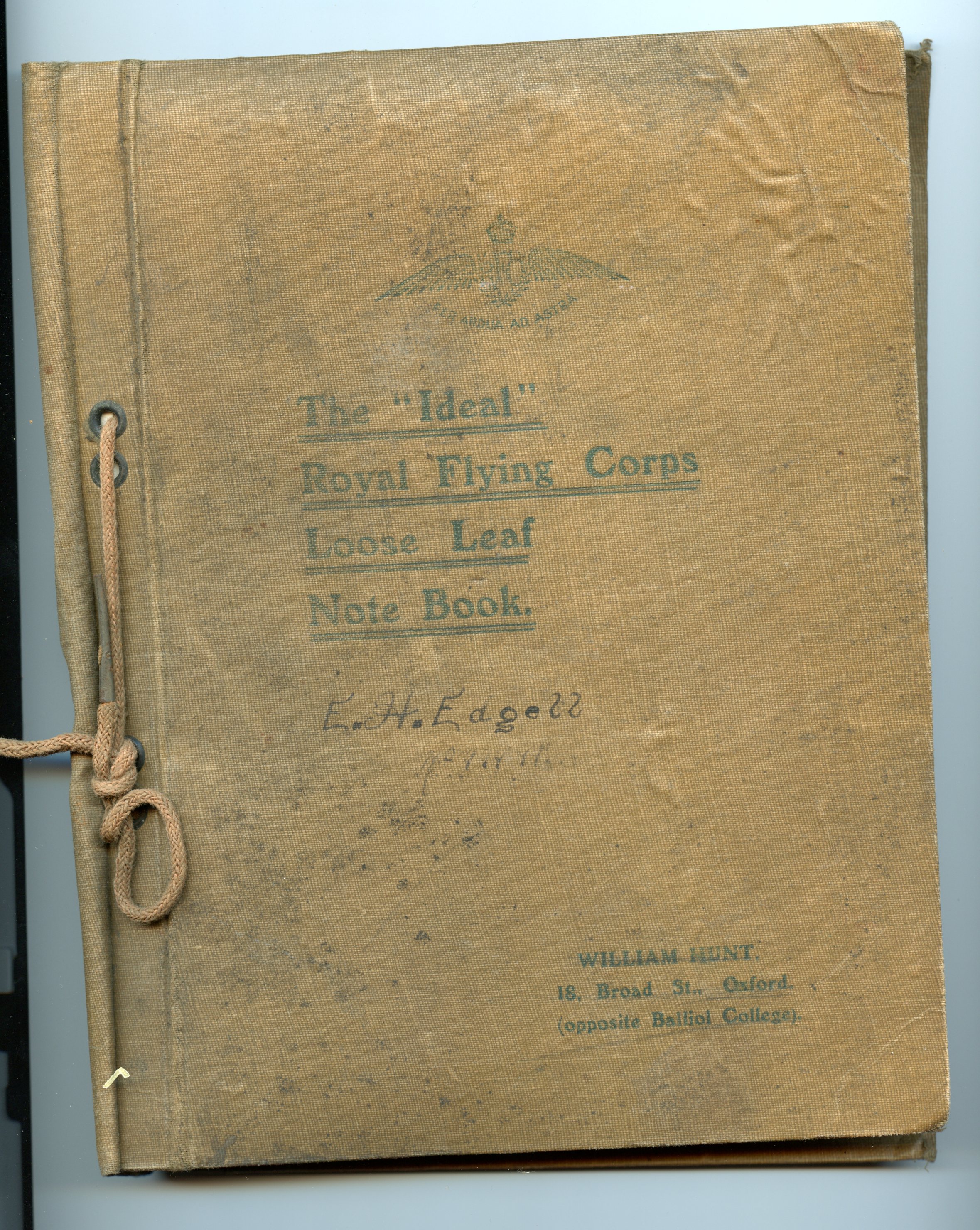 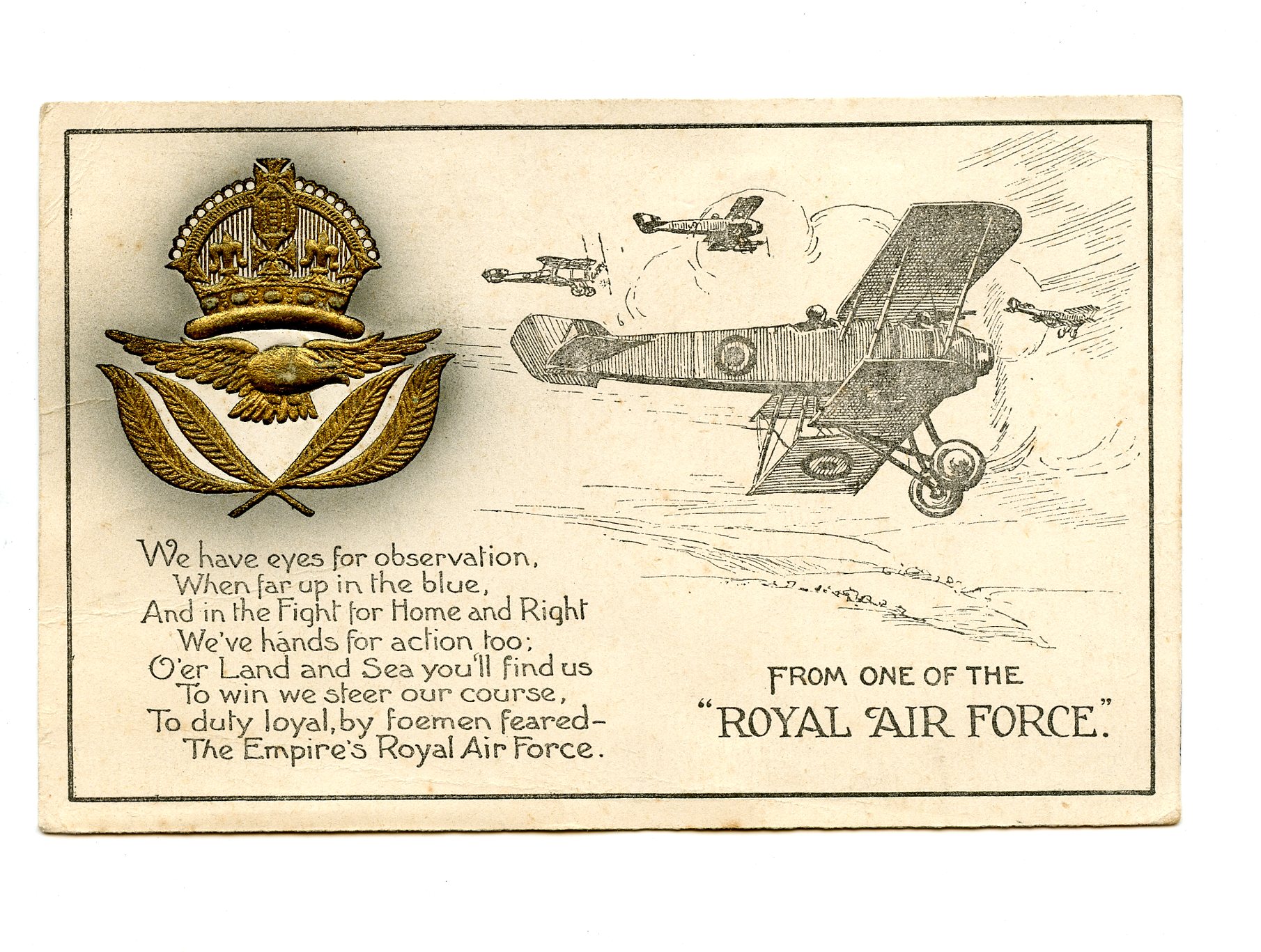 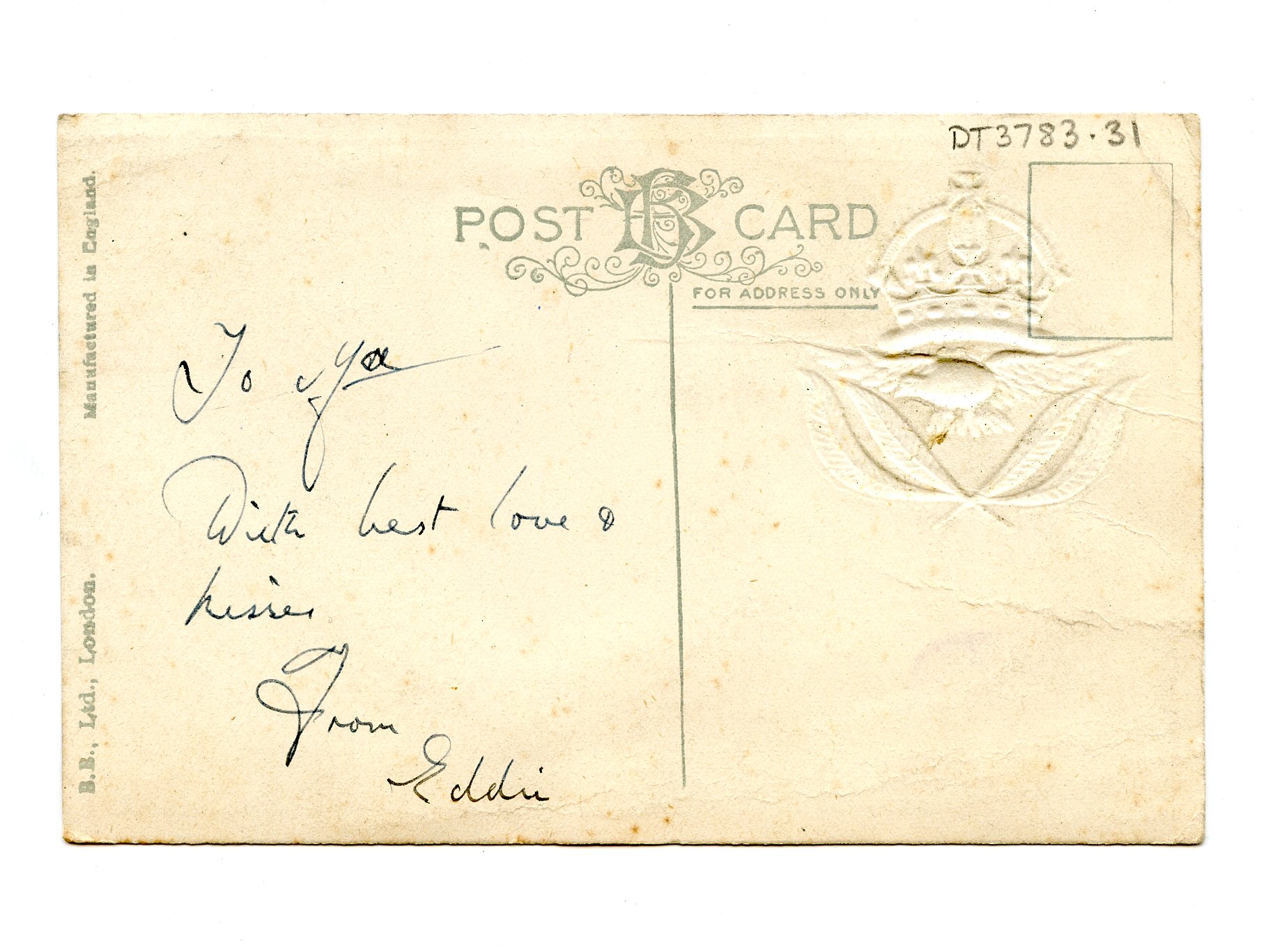 With thanks to Museum volunteer Ann Brown for her work on researching the Edgell Family and for her contribution to writing this blog.

You can explore more of the Museum's collection relating to World War One and World War Two here.