In 2019 the Museum was awarded a grant from the Royal Society to improve not only the care and conservation of the Butterfly collection but also to improve staff knowledge and to facilitate new engagement sessions with the public. This Project is today known as the Butterworth Butterflies 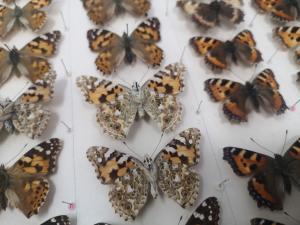 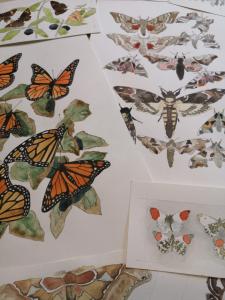 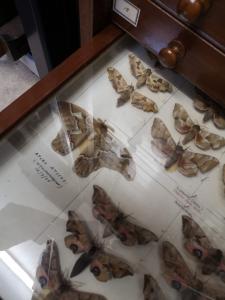 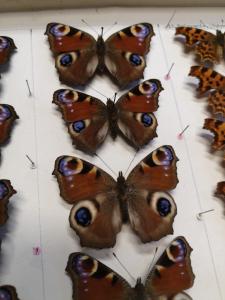 The history of Littlehampton Museum dates back to 1928 when a group of individuals came together to create the Town’s first Museum. The Museum was set up in the back rooms of Littlehampton Library with a selection of artefacts on display. This group of people were all part of a group within the town, The Littlehampton Natural History and Archaeology Society. The early collections were very much a reflection of the founders’ interests with many donating their own collections or collecting for the specific purpose of display within the Museum.

One of the collections that featured in this early Museum was a large collection of Lepidoptera. Lepidoptera is the Latin word for the group of insects that includes both Butterflies and Moths. The Museum currently holds three cabinets full of Lepidoptera specimens but unfortunately from the early 1990s they were taken off display when the Museum moved and a lack of staff specialism meant that they have sat in store, other than the occasional temporary display, for nearly two decades.

In 2019 Littlehampton Museum was awarded a grant from the Royal Society. The aim of the grant was to develop staff’s knowledge of the entomology collections held at the museum as well as find new ways to engage our audiences with this incredible resource. The Museum aimed to get some of this incredible collection back out on display.

Historically the collecting of insect specimens was a popular Victorian hobby which was particularly educational. Specimens were collected and meticulously labelled and laid out for display within drawered cabinets which could then be used for research by other scientists and enthusiasts. Today collections like these are used for studies of biodiversity and also document species that are rare or extinct.

Littlehampton’s collections were gathered from various sources throughout the 1920’s, 30’s and 40's. We do not have accurate documentation for who collected each of the specimens but we do know that many of the specimens were pinned and laid out by Reverend C D Ash, a member of the Littlehampton Natural History and Archaeology Society and an avid collector. It’s believed that some of the collection was also donated by H. C. Jeddere-Fisher. Together he and Ash wrote a report of the Lepidoptera taken in Littlehampton and District. It is clear that these collectors were passionate about the scientific study of these collections and by donating them to the Museum they hoped that they would be available for study for generations to come.

In October last year the Museum team were also lucky enough to spend time with the Curators at Portsmouth Natural History Museum learning about how to care for the specimens and how to improve their storage. We’ve also been busy developing schools’ workshops which we had the chance to test run in February. Another part of the project was to create artworks to accompany the displays. Local Artist Richard Kemp spent many hours at the Museum studying the collection and produced stunning water colours which are not now on display with the Butterflies.

But we are not done yet! Later this year we hope to be able to create a new display to make this collection easier to understand and enjoy and we will also be working with a conservator to fully assess the condition of this wonderful collection. We will also be working to document this wonderful collection so that we can make the data available to scientists for study. It’s a big project and we hope we can provide you with more information going forwards. Watch this space.