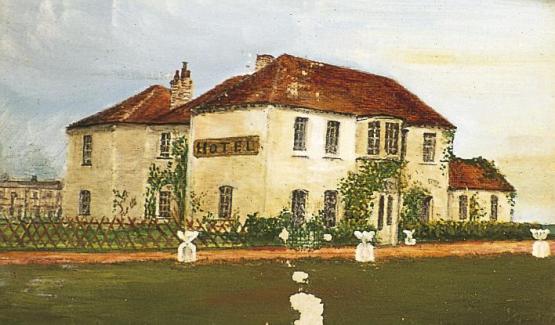 Some would say that the Beach Hotel was the jewel in Littlehampton’s social crown for two centuries. It occupied a key site right on the sea front, so guests could step straight from the hotel onto the beach. Over the years many famous visitors stayed there, and it was also the watering hole of choice for those wealthy people who kept a holiday home in the area. It also developed a thriving function business and had facilities to host major balls and conferences.

In fact there were two hotels; the first, the Beach Coffee House opened in 1775 and branched out. It was here that Hubert Parry stayed with his wife Maude when they first visited the area in 1876. They described it as quaint and old-fashioned, but nonetheless they formed an attachment to the area that would last until Parry’s death in 1918.

A decade after the Parrys’ visit, the second hotel was built. This was a much grander affair and was a key part of the town’s infrastructure until it closed in 1987. It was at this hotel that Ronnie Barker and his wife stayed when visiting Leslie Crowther in the 1960s, and they in their turn were seduced and bought a property here.

In fact quite a few show business luminaries had houses in the area, including members of the Crazy Gang, Stanley Holloway and impresario Bernard Delfont. The cocktail bar at the Beach Hotel was a place where celebrities could often be seen.

Sadly the Beach Hotel was badly damaged in the freak storm of 1987 and was sold for redevelopment. Great Victorian hotels such as the Adelphi in Liverpool or the Imperial in Blackpool had difficulty adapting their architecture to meet the needs of clients who wanted an en-suite bathroom and no longer needed rooms for servants travelling with their employers. The intention was to build a new conference centre and hotel, but this all fell through, the hotel was demolished and replaced by Beach Crescent flats. The Channel Keep and Kingmere blocks stand on what was the Beach Hotel’s tennis courts.