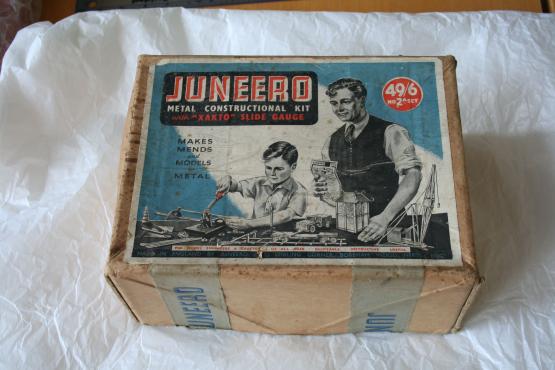 This construction set is often thought of as a toy but in reality, it was the exact household item that people needed during the 'make do and mend' era.  Rather than having pre-cut pieces and fixings, the sets worked on the basis of the owner buying lengths of maleable metal strips and cutting, bending and bolting them into various shapes. There were patterns invented not just by Juneero enthusiasts, but also the company themselves would publish them and make them available for sale at various retailers. These kits were used to do various things such as - repairing picture frames, creating model cars, fashioning a shower or bath caddy for the bathroom, and many other inventive ideas. The precursor to Meccano and K-Nex, the patterns are a similar idea to what is available for open source 3D printers now.