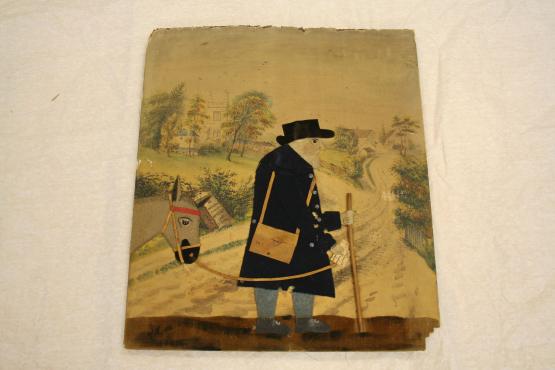 George Smart may not be a name you’ve heard before. George was an artist, a self-taught one who made his artworks to sell to tourists. His work is what you describe as Folk art, as George was untrained, and went on to develop a unique style of mixed-media collage. In the last few years, George Smart has been recognised as an important figure in the history of British Folk art. In 2014, Tate Britain even included his work in an exhibition entitled ‘British Folk Art’.

Working in Frant, East Sussex, George was a tailor by trade and he used scraps of used material in his work. Many of his quirky collages are of cartoon-like characters. It is said that they are based on people George saw day-to-day in his village, many appearing in profile giving the impression they are passing by.

Littlehampton Museum are fortunate enough to have a George Smart piece in the art collection. This one, called ‘Old Bright, the Postman’, is from 1827 and features a postman and his donkey. This collage is made from different materials like leather for the satchel, velvet for the coat, foil for the buttons and paper for the body. In contrast, the background is painted in a traditional way with delicate watercolours.

Old Bright and his donkey look similar to caricatures, this is partly because George was not a trained artist and his style was more naïve. It is also because they were designed to be charming souvenirs for tourists. There are a few copies of this particular collage, all of them slightly different. This tells us that it was a favourite of his and that the piece was very popular with his customers.

‘Old Bright, the Postman’ also has some intriguing information hidden within the collage. See the milestone next to the donkey? George often put these in his artwork, each one with a different date. This one says “1827”, the year it was made. The letter in Old Bright’s hand is also addressed to the artist himself. Finally, the most interesting detail is found on the back:

This is a poem written by George about him and Old Bright. It is a comical poem, weaving a tale about the artist who made this collage. This was a way that George helped to establish himself as an artist. In the poem, he describes himself as a:

“Professor of – peculiar art; Whose works appear by no means faint”

George understood that his unique style of folk art was unusual, and that it was this that made him very popular. He deliberately creates bold and eye-catching images, “by no means faint”, because that is exactly what he did best. You certainly get a feeling from this amusing poem that George celebrated his popularity, and was very grateful for it.